There is no doubt that being able to play lots of notes in quick succession at the piano can be exciting for the pianist and impressive for the audience. It is only natural, therefore, that a student may want to develop a certain degree of velocity at the piano . In fact, not only is it desirable but also somewhat necessary for any developing pianist since many of the great works in the repertoire require fast playing. The third movement of Beethoven’s “Moonlight” sonata just wouldn’t sound right if you played it adagio or andante. Developing speed at the piano, however, is not easy. It requires a lot of hard work, persistence, and patience. Of course I say “hard work”, but what I should really say is smart work. Let’s look at some smart ways to develop speed at the piano.

Legato playing is the foundation of quick playing. Without it you will never develop real speed at the piano. The reason for this is that in legato playing the fingers must be ready to play each note ahead of time. This way of playing naturally aids fast playing since there is no delay between each note. Non-legato playing on the other hand requires that each finger is lifted off the key before the next note is played which leads to a slight delay between notes and also more movement of the fingers, which naturally takes up time.

I am often telling my students that they must slow down – when they are both performing for me and during their practice. Ironically, this is one of the keys to developing speed at the piano. Surprised? Let me explain.

When it comes to quick piano playing, the number of notes played per second is only half the story. Rhythm, dynamics, and articulation also play a very important part in the perception of speed. It is a rather curious phenomenon, but true, that messy, uneven playing will often sound slower than smooth, polished playing, even if the tempos are the same. This is why I say that rhythm, dynamics, and articulation are important for the perception of speed, rather then for speed itself.

So, for your piano playing to sound quick, the quality of your playing must not be compromised. The length, volume, and spacing of each note should be precise. This is where slow practice comes in. When you practice slowly you allow yourself the opportunity to pay attention to the minute details of the music. If you always attempt to play quickly, it will be impossible for you to notice the details enough to be able to improve them.

I know, I know… this is exactly the opposite of what I just recommended, however, slow practice alone will not improve your speed. The muscles in your fingers need to develop their ability to move quickly, which means you need to practise moving them quickly. If you always play quickly you won’t develop the accuracy and precision needed for effective quick playing, however, if you always play slowly you will never develop the physical dexterity needed to play quickly. Both approaches are needed.

It is extremely important to know the music you are playing. In an ideal world you should be able to recite the notes of each piece you are playing from memory. This isn’t an ideal world however, so perhaps that is taking it a little too far. Still, you should know the music well enough that you needn’t rely entirely on muscle memory to perform the piece. While this might not seem directly related to the speed of your playing it is closely related to the next point.

This is most definitely related to speed and is impossible without the last point. The great pianist Josef Hofman had a similar recommendation, he said “we must first learn to think quickly through the course of a piece before we can play it quickly.” (You can read Josef Hofmann’s excellent book “Piano Playing” on Project Gutenberg here). To play a musical passage quickly you should play it in broad brush strokes rather than individual notes. A flourish of a C Major arpeggio is, and must be thought of as, one musical element – even though it may contain many notes – and the end of that element should be in your mind even as you play the beginning. As you move from one musical element to the next, you must also be prepared for the element that follows or you run the risk of interrupting the flow of the music and therefore making it sound stilted and therefore slower.

This is an old trick but it works. If you have, for instance, a two octave scale of even semiquavers it may prove too much in the beginning to play the whole two octaves very quickly. What shouldn’t be a problem, however, is playing a small number of notes very quickly then pausing on one before moving to the next group. An illustration might serve better to explain; 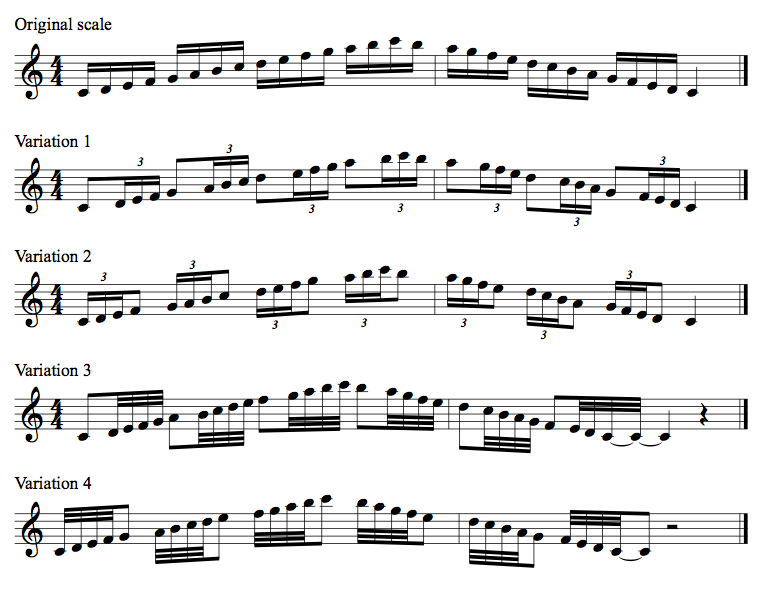 Above, the original scale is two octaves ascending and descending of a C Major scale. The four variations below it keep the same notes but simply alter the rhythm. In each of these variations there is a small succession of quick notes followed by a pause on one longer note. In order to avoid developing a habit of pausing on the same notes it is important to practise as many different variations as you can.

Developing speed at the piano requires a lot of physical adaptation in your muscles and your nervous system. This takes time. Unlike a computer which can have software installed on it to instantly learn new tasks, our brains and bodies need to adapt over time. A large factor in how your brain and body determine what kinds of activities it adapts to is how regularly the activity is practiced and over how long a period. It is also a good idea to spend a lot of time on each piece you learn. Don’t give up when you are playing it well enough. Aim for perfection. You might not get there (few do) but striving for it will improve your playing immensely.

Send us a message